Here's a 'blast from the past' pages from the Kelling Flier newsletter 2004...

Download File
Some of our members have been busy building a joint project for a 'Coastal Challenge'. The original OQ-2 Radioplane was flown from Weybourne, and was the first mass-produced UAV or drone in the United States, manufactured by the Radioplane Company. A follow-on version, the OQ-3, became the most widely used target drone in US service, with over 9,400 being built during World War II.

Thanks to Andrew and you all for the contributions to the re-born 'Kelling Flier' Newsletter.... Don't forget to have a look at the 'Flier Photos' slideshow too for some larger photos.... and find some BARGAIN BUY stuff for sale in the Flier issue 25....
Here are some more stunning models from our prolific model builder Dave F....
Update on the Dragon Rapide, (see below).....
it's had some taxiing trials, with a view to giving it a maiden flight, but found a few minor adjustments needed, so now just waiting on weather and suitable time.

Dave is still waiting on the retracts for the two Wildcats he is building.

So while he's waiting he has got a Flying wing on the building board !
it's a Westland-Hill Pterodactyl Mk.IV. 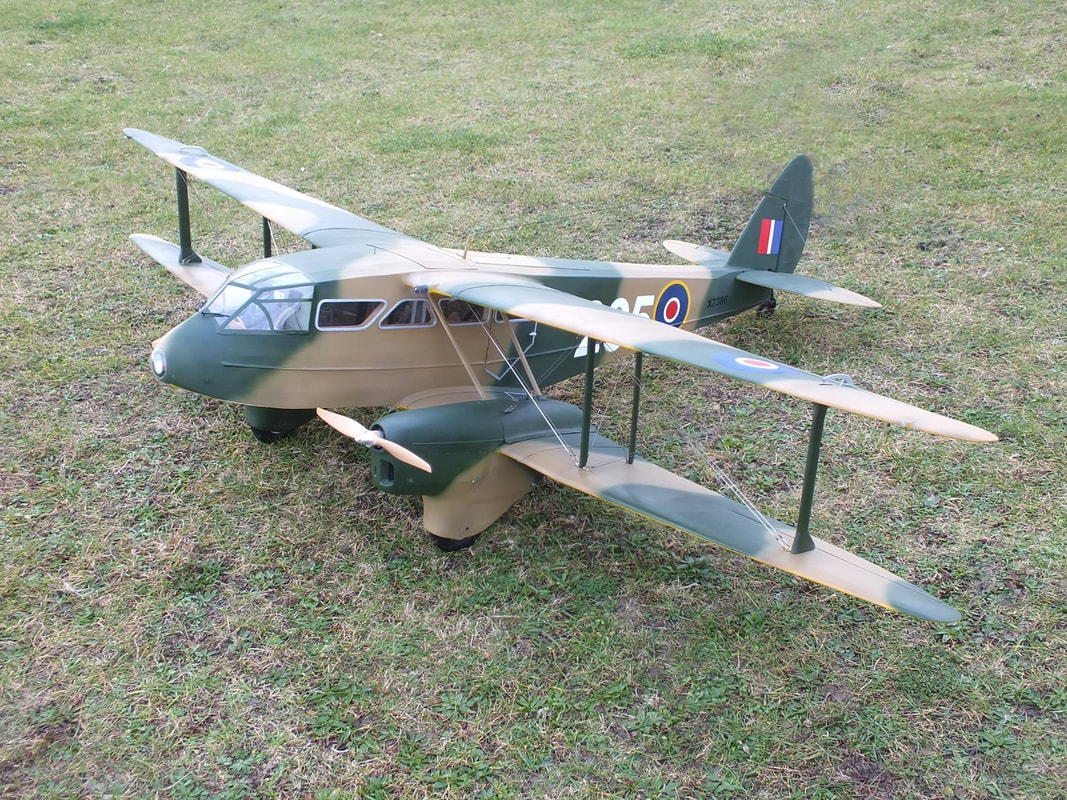 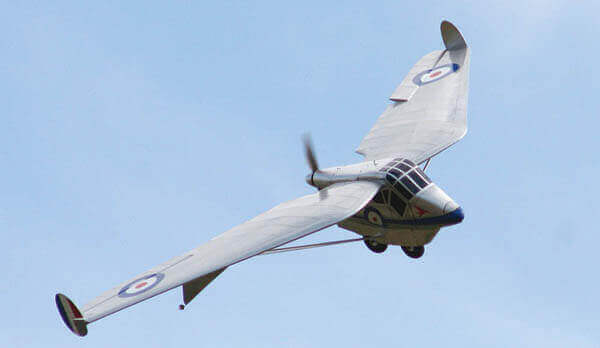 The `PETE` 1/3 scale the Howard Hughes 1930 racer that Dave had to cover and glass and paint and his Dragon Rapide that is starting to take shape.... 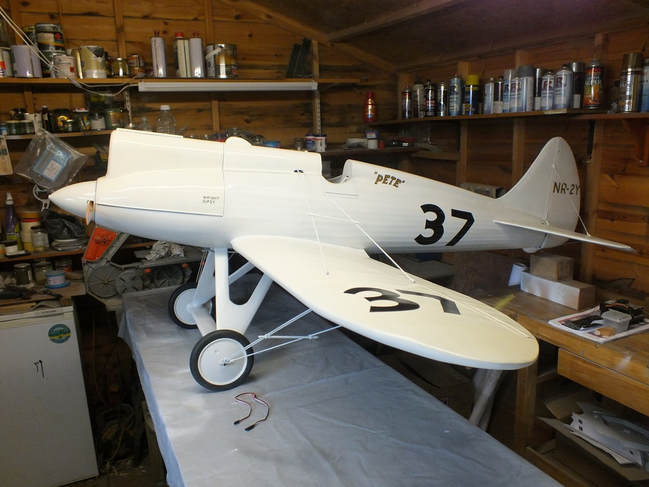 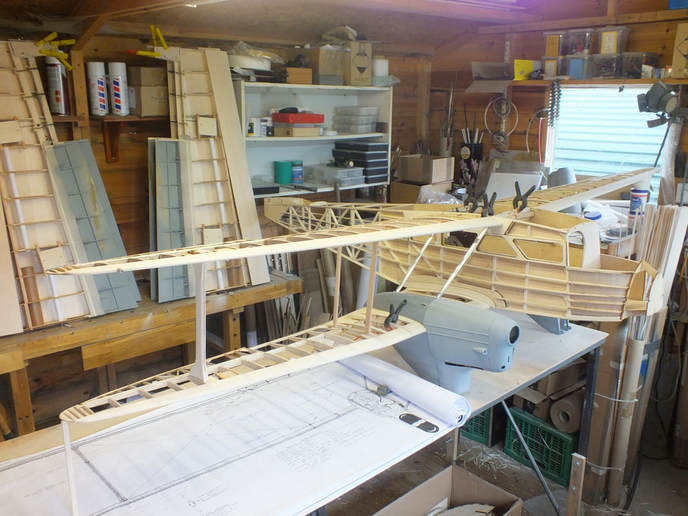 It has a DLA32cc petrol engine running on a tuned pipe with a Engel super
silence 20X12 carbon prop. Rubber engine mounts were used to make the model as quiet as possible.
MacGregor HV servo's and LiPo RX batteries 2200Mah X2.
The overall finish of the model was very good but some of the hardware
was rubbish.  The wooden dowel elevator push rod had a dark mark in it
which turned out to be a knot, as soon as some bend was introduced it
snapped.  It was replaced with a carbon fiber one.
Fly's like on rails, no nasty habits. 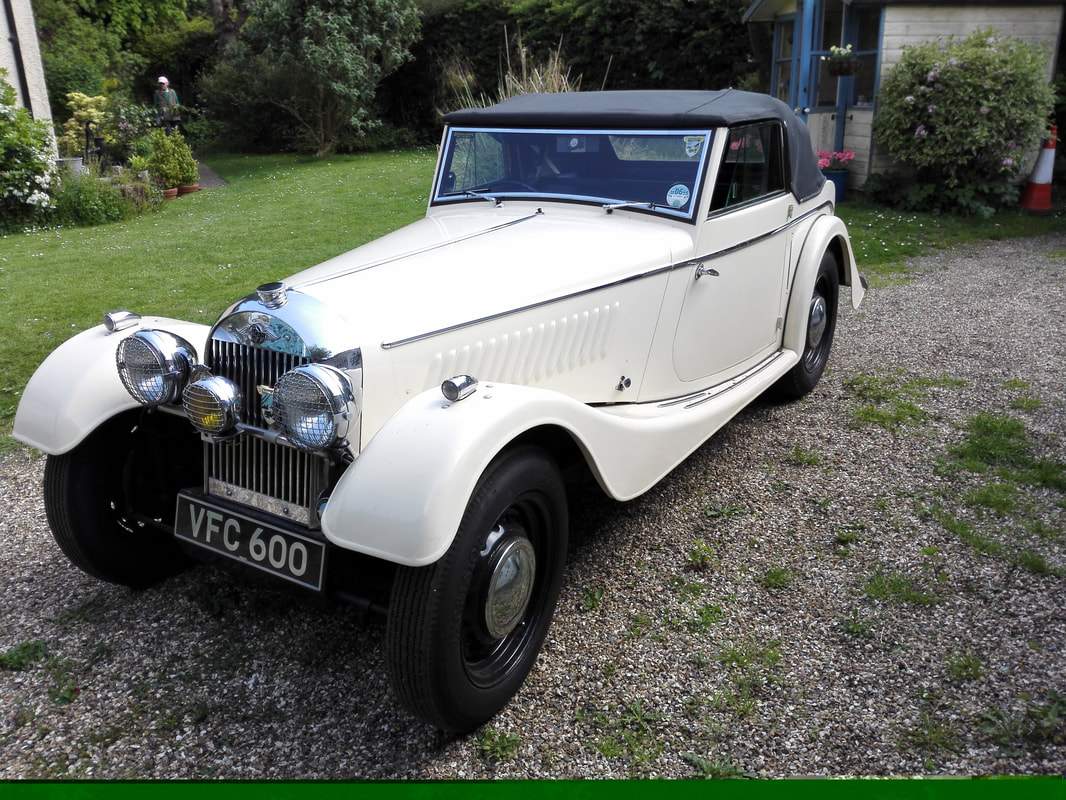 A little something different from model aircraft, a model just finished by Dave F,
of his brothers 1952 Morgan + 4........ the 'full size' version above.
24 ins overall length, approx 1/6 th scale.
Being scratch built, the tyres were the biggest problem, but Dave found
some from a Pocher car kit, so the model was scaled up from
them making it approx 1/6 th scale.
Materials used:  Balsa for the body, plus ply , brass tube, lamps and wheels
moulds made and cast in resin, with a working suspension on the front !
Friday April 28th 2017.
The ashes of the late Mike Tew were scattered on the airfield at Muckleburgh, a small party of club and family members were present, along with Sir Michael Savory.
​
Mince Pie Sunday (18th December) has been re-introduced this Christmas as we have a nice new caravan to sit and scoff in..... and have a few flights despite the cool breeze. 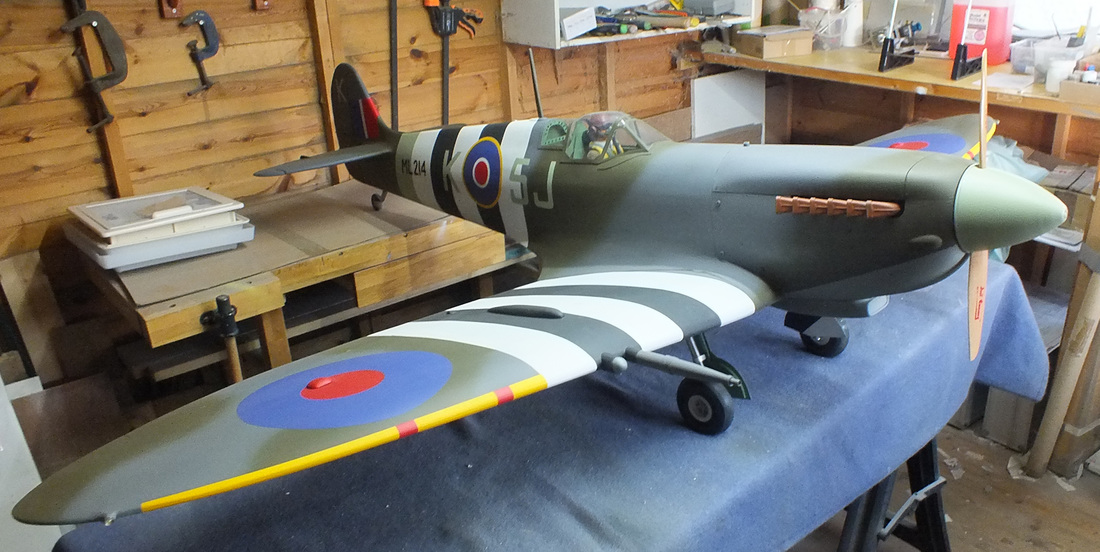 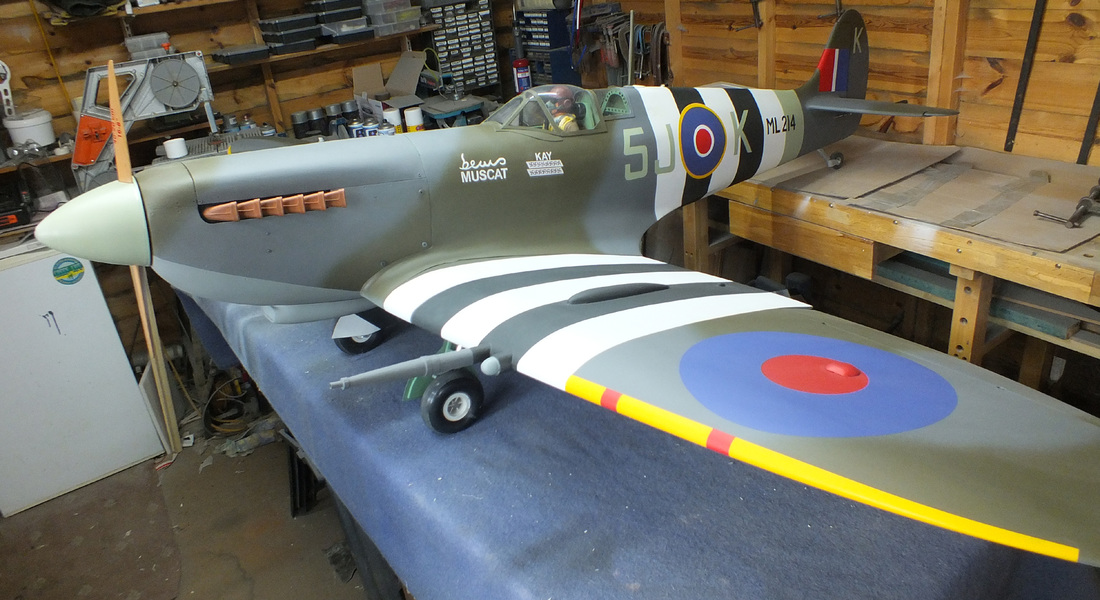 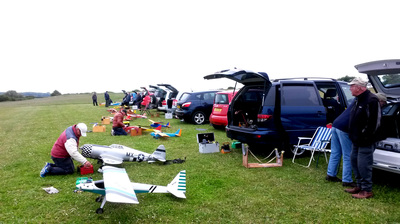 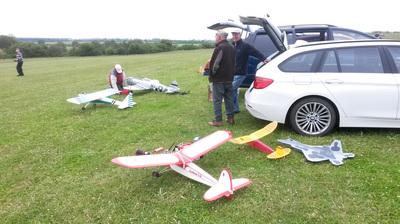 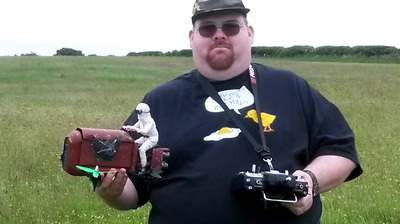 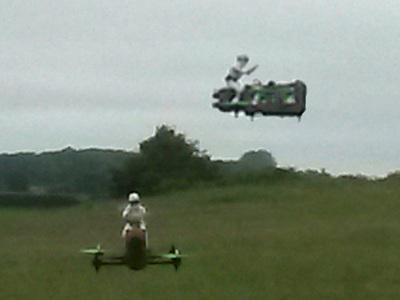 Don't forget to keep up to date with the latest CAA regulations concerning our sport.....see the LINKS page for further info...... 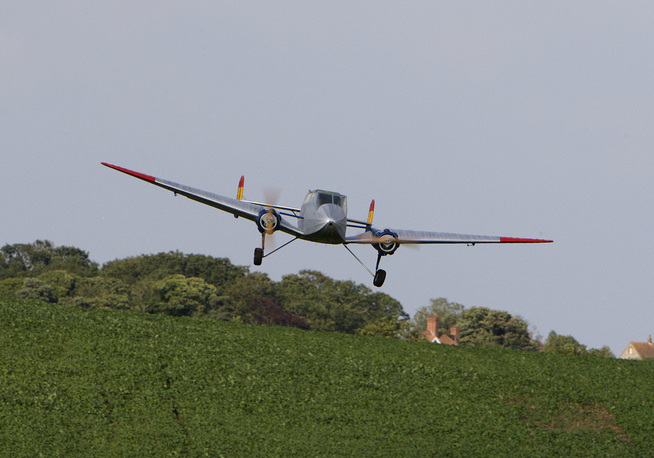 ﻿ Here's a superb picture of Andrew T's General Aviation Monospar ST-25
One flight in August last year.
The model is to about one third full-size. (Andrew doesn't use the word "scale")  giving a wingspan of 13 ft. Power is two DLE 55 RA petrol 2 stroke and 22x10  Falcon props. Weight 57 lbs but some of which is expected to come out after further trimming.
Construction of light-ply, ply, Hoover handle, balsa and Sig Koverall. The colour is that of a Spanish civil war example of around 1937. The model has two Futaba Rxs (FHSS) on five channels and five cell Ni-Hy battery’s. 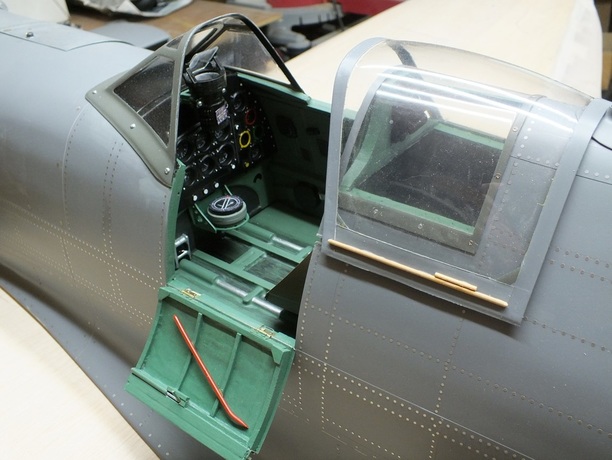 ﻿Dave Franks has been doing some more excellent work.... he writes:
A few photo's of a Top Flite ARF Spitfire Mk9 I finished for someone, I had it with just the engine fitted, and a bag with all the internal bits, so it was strip off all the Mono-coat and glass it completely,  adding panel lines and rivets, cutting the canopy to make it slide, plus making the cockpit door to open, also fitting working nav lights. Here's a link to my drop-box with more photos
SPITFIRE PHOTOS
Secretary Andrew's 'Birthday Present' AcroWot Mk2.....awaiting its testflight 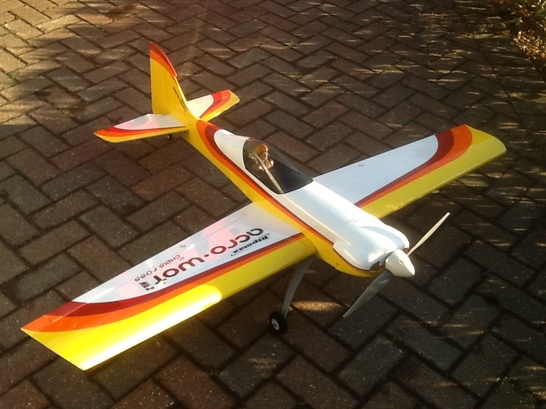 Dave B has been working on a McDonnell Douglas MD 500 Defender helicopter,
1/6th scale.  Fitted with Trex 600 nitro mechanics. The engine is an OS 50 hyper nitro. Painted in desert sand. Dave has not decided on a scheme yet. It will be either US Army Rangers or it will have Israeli Air Force markings..... It will be nice to see a scale helicopter on the field for a change. 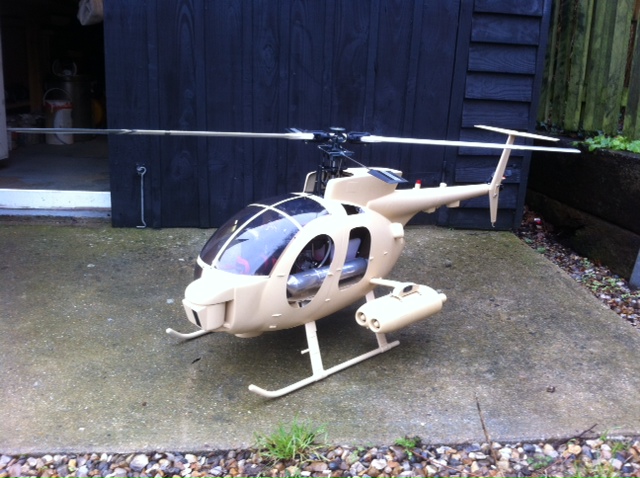 Nicks latest is an ARTF Wot4-XL  68" span (a larger updated version of the old Chris Foss design) powered by an Evolution 20cc petrol engine and fitted with a Burley tuned pipe. JR 2.4 ghz DMSS rx with 5, JR high voltage servo's.  2 cell LiPo for both ignition and rx (no voltage regulator needed). Fly's just like the standard Wot4 but very soft on elevator so needs to recheck C of G. Still running in the engine and not yet quite capable of the unlimited vertical climb that Nick is accustomed to..... 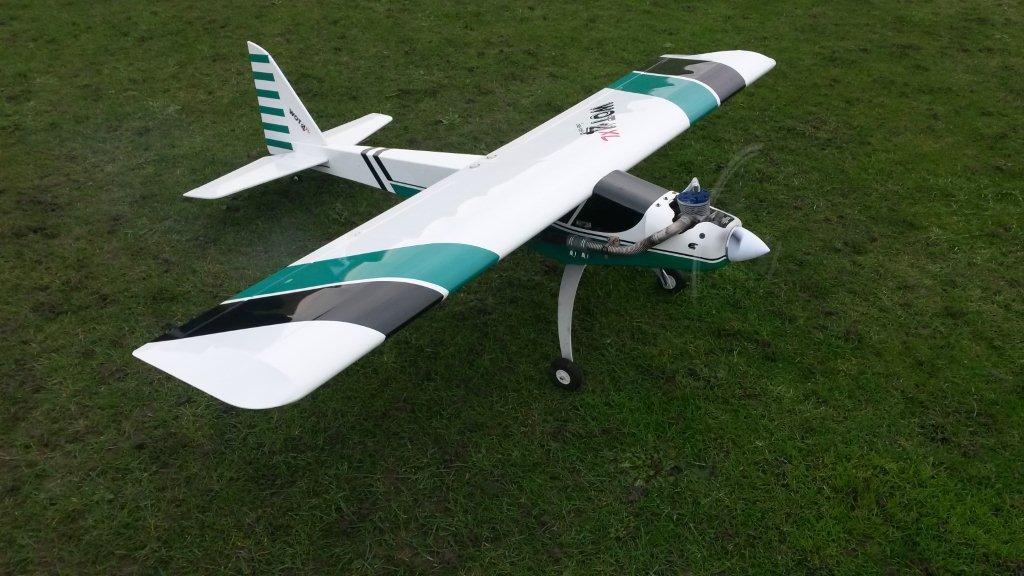 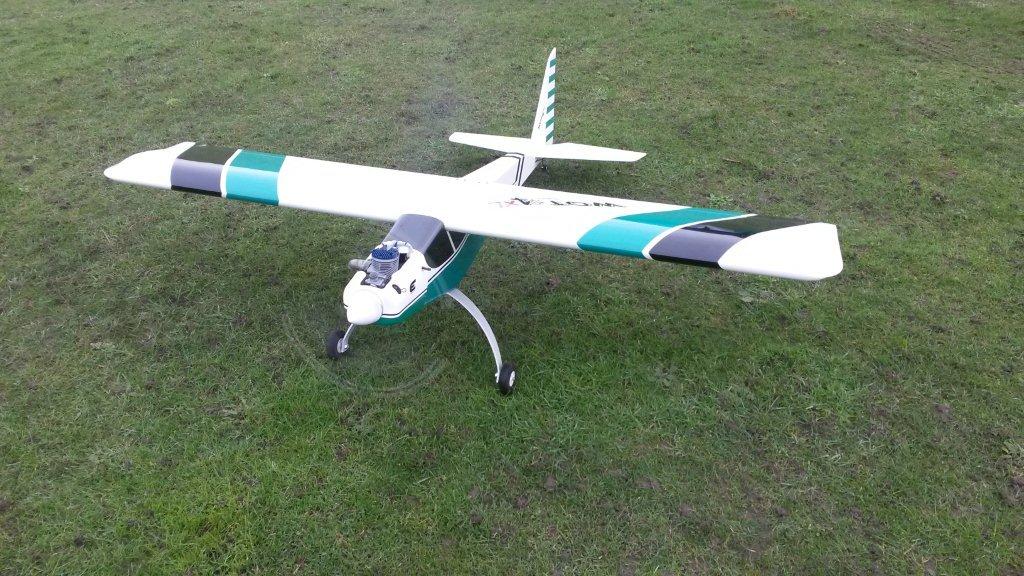 1929, early airliner designed by Robert Noorduyn for Fokker USA.
(Noorduyn later designed the NA Harvard and DH Beaver).
It was used extensively in Northern Canada as a 'bush plane'and could
easily be fitted with either wheels, skies or floats. Room for Pilot in open
cockpit and 5 passengers in the cabin. No Hostess or drinks trolley!!!


Flies like my Beaver on permanent full flap!
Just look at these photo's of Roys V1.  If you did not know it was a model you might be worried.

The model is all Roy's own work, he designed and built it from scratch.  It was hand launched but will also fly from a dolly.

Well done Roy, good work.
Here's what JW has been doing lately.....
After going to Worstead Festival with my grandson and trying some basic 'water rockets' there, we thought that we would have a go at making one as well.
Researching online I discovered a massive following and some very advanced 'multi-stage- water rockets! Here's what we ended up with.......great fun!  A 2litre lemonade bottle, a cup of water and 140p.s.i...........

Also on my bench,  a scratch-built, electric pusher, depron A-10.  An A4 size printout of a fullsize 3-view drawing, scaled up by 5.75,  gave a 42" wingspan....... has now flown successfully .......(and twice not so successfully!).....after a 'new nose' was fitted, dummy engines realigned, motor thrust angle adjusted, and CofG position moved. 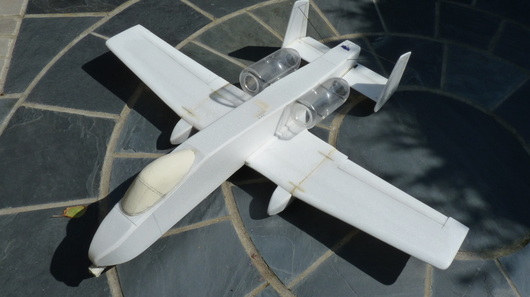 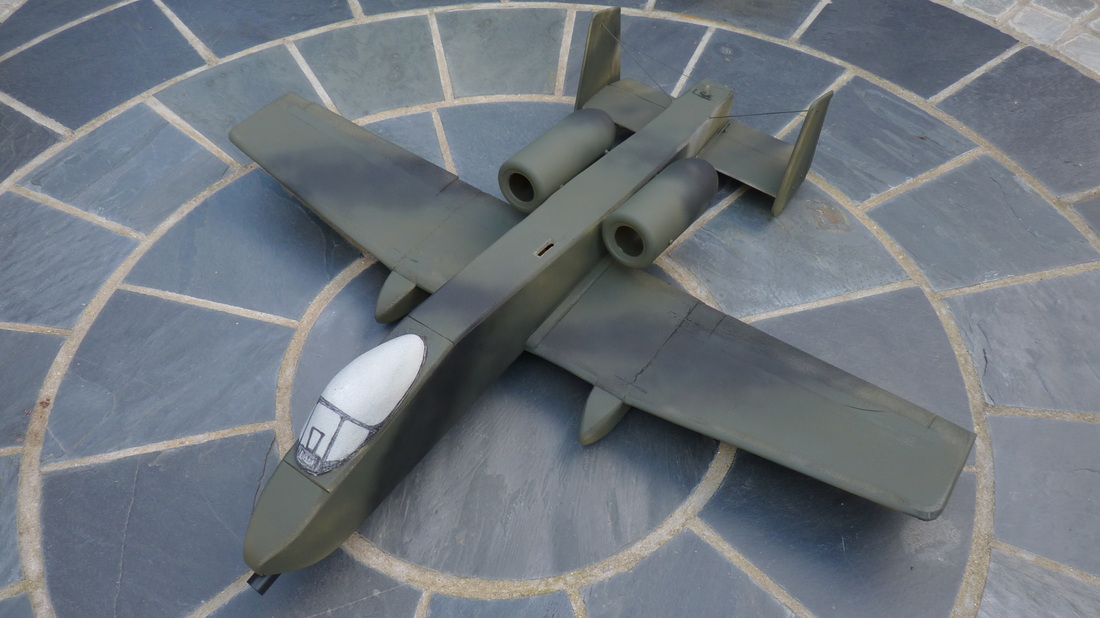 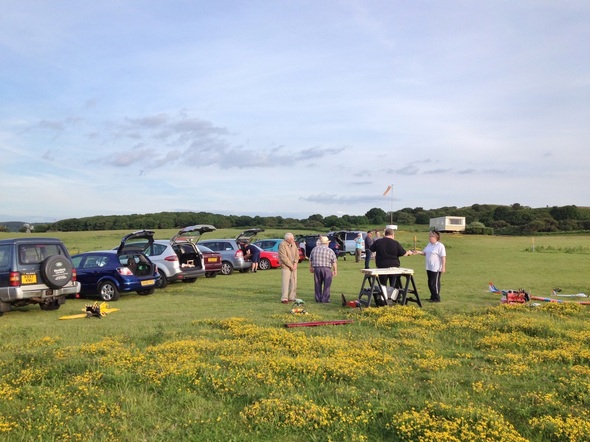 A beautiful afternoon and evening at Muckleburgh saw the June monthly meeting well attended.......  It would be nice to see the flying field like this more often...... Gordon set up the limbo poles and a few brave souls had a go! 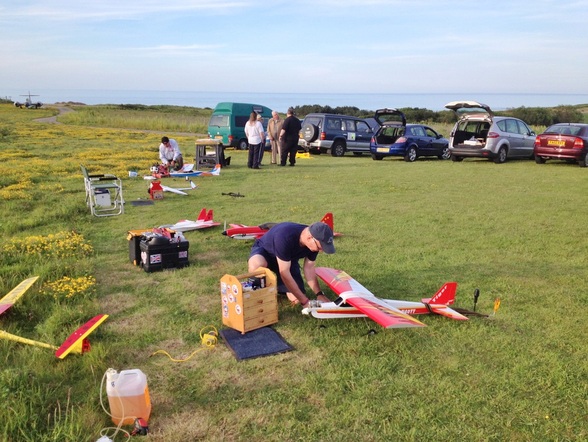 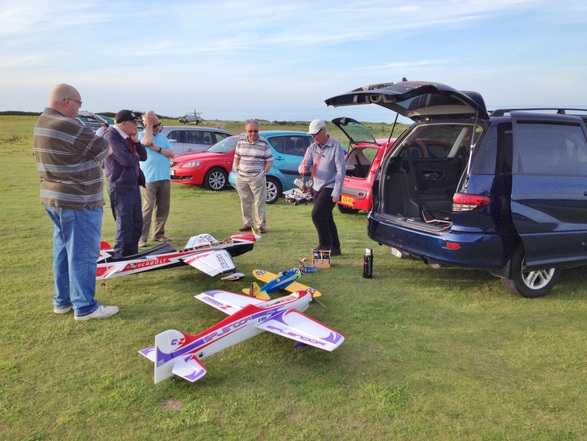 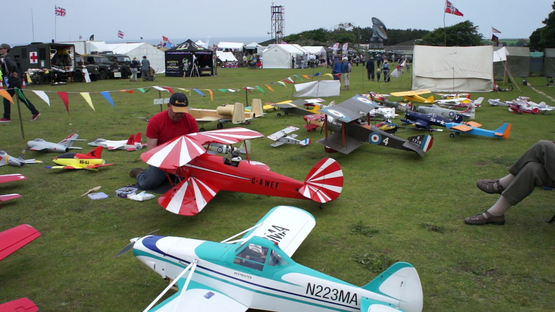 The Club once again put on a very good display of models and flying in aid of the Muckleburgh Collection open weekend recently. 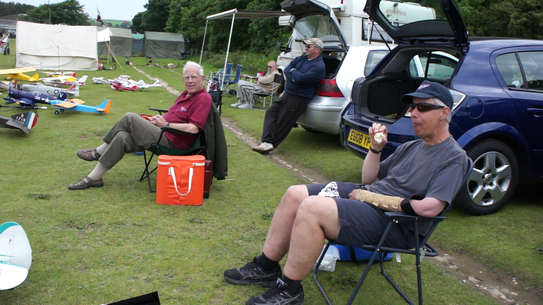 A note from David Coombes, writing from France.......

I am now a full Brevet de Base G.A.Pilot, but need a few more hours
solo to get passenger endorsement. Also, have ULM licence, and am
about to get that licence endorsed for passenger - it's all go here.
Yesterday, went up in the club ULM, another Super Guepard, with
Instructor, as blowing 20 to 25 knots (!!). Really over the limit for
ULM's, but off we went, calmish at 3,000 ft. Did two landings at
Figeac, then back at 3,500 ft., now calm. Approaching Villefranche de
Rouergue, he said, you do a long final approach, so did it, losing
2,500 ft, head wind, odd as crossed threshhold at 140 kph, instead of
normal 90 kph, no flaps at all, and just seemed to hang there, 50 kph
headwind, stalls at about 70 kph.,great fun. He said log it up as a
solo, as you did 99% of the work !! And on 11th. April, I'll be 81!!!!!!!!

The old Austin, still in use, going to a Classic car "do" this Sunday,
Me taxiing F-PRNE back to base, with Instructor. (Jodel DR 1053),
me after first solo. Peter Lee's plane, I've flown a few times.
F-PRNE again, Super Gurpard, the ULM currently flying, cockpit of F-PRNE, and cockpit of Robin DR 400, flown about 3 times, loads of power,
OUR house, the slate roof, 3 roof windows,sheet in middle of our field, orchard off to right.
Have also flown a Jodel D.112, a 2 seater Jodel, 65 HP. built 1957 (!!!), devil steering
on ground.  Coo,,,,,,, flown 5 different planes in all. About 450 or more take-offs and landings, nothing broken yet. Early on, Instructor had me do 10 of these, consecutively, tiring, but building up confidence.